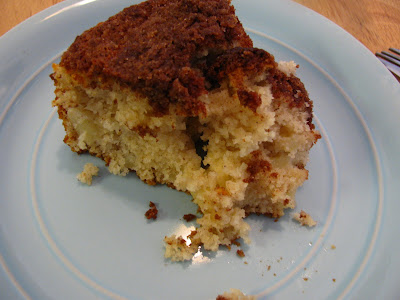 This recipe calls for Bisquick, which I don't have . . . so I looked up a recipe for homemade Bisquick mix and improvised. This proportion makes almost exactly the amount called for in the recipe. It can also be quadrupled to make a lot, and frozen for later use. (I probably would have done that, except that we're running dangerously low on flour!)

Mix first 4 ingredients together; cut in shortening until mixture is crumbly. In separate bowl, mix:

Combine first 3 ingredients. Cut in butter until mixture is crumbly. Sprinkle over coffee cake; bake at 375 for 20-25 minutes.
Posted by cindy baldwin at 12:28 PM