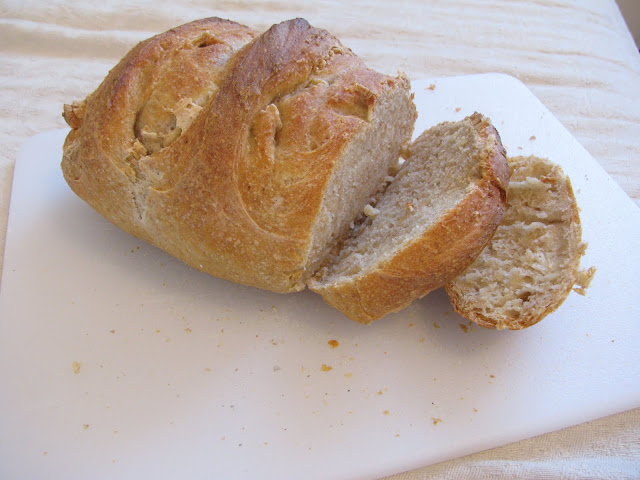 A quick note on larger loaves— I have only used the method above with loaves that are fairly small (about 1-2 pounds). For a much larger loaf, you will want to reduce the heat a bit (probably to 400 or 425) and up the cooking time, so that the center of the loaf has a chance to cook before the crust browns too much.
Posted by cindy baldwin at 4:26 PM 6 comments: 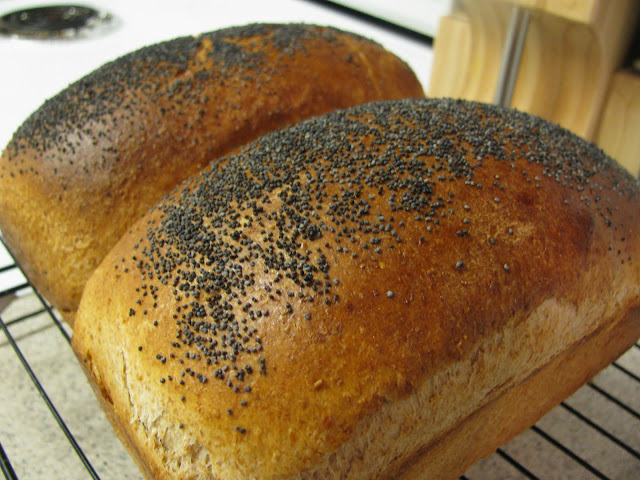 Rating: 5 stars
Prep time: Not hard, but time-consuming
This is soft-crusted wheat sandwich bread like your mom/grandma/Relief Society president used to make. Although I've lately gone to using the Artisan Bread in 5 Minutes A Day method, I still have a soft spot in my heart for this recipe.
3 cups warm water
1 T yeast
1 T salt
Generous 1/3 cup oil
1/3 cup honey
Approximately 8 cups flour (I typically do about 6 wheat, 2 white—my store-bought wheat is too coarse to use 100% whole wheat and get a proper raise)
Sunflower seeds, rolled oats, flax seeds, poppy seeds or any combination of preferred grains & seeds (optional)
Egg white (if you use seeds)
Preheat oven to 350. In mixer with dough hook attachment, combine water and yeast. Add 3 cups wheat flour, salt, oil, and honey, and mix on low speed until combined. If desired, add a small handful of sunflower seeds to dough at this point. Slowly add in the rest of flour until your dough is no longer sticky and forms a ball on the dough hook, pulling away from the sides of the bowl. (A note on breadmaking: the flour measurement is NOT an exact science. Depending on the temperature, humidity, and other factors, you may need more or less flour. Once your dough ball is pulling away from the sides of the bowl and you can touch the dough without getting it all over your finger, then you have added enough flour.) Turn to a higher speed and let the mixer knead the dough for about 6-8 minutes. Remove dough from hook and form into a ball; spray with cooking oil (making sure to coat all sides) and let rest in bowl, covered, for about an hour or until doubled in size. Divide dough into 3 portions. Roll each portion flat with a rolling pin to remove air bubbles, then shape into a loaf (you do this by rolling your flat rectangle up into an oval and patting the ends together). Place loaf in sprayed loaf pan, cover, and allow to rise for another hour or until doubled in size. If desired, brush loaf with beaten egg white and sprinkle toppings over loaf—I use a mixture of ground rolled oats, ground flax seed, and poppy seeds. Bake in a preheated oven at 350 for 30 minutes, or until loaf is rich brown.
Posted by cindy baldwin at 1:03 PM 2 comments:

Labels: bread
Newer Posts Older Posts Home
Subscribe to: Posts (Atom)
This will be a place to store my favorite recipes—both those that are already in regular rotation at our house, and new recipes that we want to introduce into the rotation. Because I'm something of a cheapskate, nearly all of these recipes are ones that can be made with the kind of ingredients I usually have on hand—which aren't very fancy. (The exception is fresh parmesan cheese, which is a staple in our home!) I used to rate the recipes I posted here, but since they ALL ended up getting 5 stars, I discontinued that! Also, all of these recipes are fairly healthy, but those that make for particularly guilt-free eating are labeled "healthy."
Bon appetit!