Over the past few years, I've experimented with making more and more things from scratch... but until recently, I had never made my own chicken stock. I decided about two months ago that that was going to change! Inspired by a method on "Our Best Bites," I used a rotisserie chicken carcass to make some truly delicious chicken stock. I plan on doing this once a month for, oh, the rest of my life! I don't know if I can go back to bullion cubes!

I tweaked the original method a little bit. Here is how I did it:

Ingredients:
1 rotisserie chicken carcass, picked clean of meat (I picked all the meat off and then used it in meals throughout the rest of the week)
1 medium onion
1 potato
A few cloves of garlic, peeled
Fresh ground pepper, coarse
LOTS of coarse salt
Rosemary, parsley, thyme, bay leaves, basil (and really, whatever spices you feel like!)
Water

In large stock pot, place chicken carcass, root vegetables, and seasonings. (Don't skimp on the salt... and plan on adding still more later. I had Mahon periodically taste the stock, and he kept adding a ton!) Fill pot with water until your water depth is about 3 inches over the chicken. Bring to a boil on high heat, then turn to low and cover. Simmer at least 3 hours (I tasted mine after about 2 and then added more salt and spices) or until broth is a rich golden color and has lots of flavor. (Note: I usually start mine in the morning and leave it on all day. The longer it simmers, the more nutrients and rich flavor it has!)

Strain all ingredients through a colander. I got about 20 cups of stock out of this! To store it, I froze it in various containers—one that held about a quart (I later used that big container to make chicken noodle soup) and several pint-sized freezer jam containers. I also filled three ice cube trays with stock, let them freeze, and then transferred the stock cubes to a ziploc freezer bag. Each cube was about 1/8 cup, and they were GREAT for anytime I needed a cup or less of stock—I could just pull out a few cubes and let them melt in whatever I was making!
Posted by cindy baldwin at 8:00 AM 1 comment: 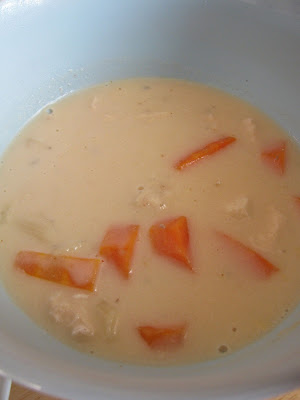 My mom taught me to make chicken noodle soup with a can of cream of chicken in it to make it a little bit creamy. Lately I've been making my own chicken gravy (recipe to come soon) instead of cream of chicken soup, so I don't have any on hand anymore. I wanted a way to make my chicken noodle soup still a little creamy, so the other night I did some experimenting. Mahon pronounced this "the best chicken soup" he'd ever eaten, and we both were practically licking our bowls by the end! The tiny hint of chili powder gives it just the barest, most subtle kick and helps round out the flavor beautifully. If you want it less creamy, halve the roux mixture and add a little more broth or water.

In medium saucepan, melt butter and sautee onion, pepper, and garlic on medium-high heat until just barely brown (about 2 minutes). Add 1/8 t. chili powder. Add in flour and stir quickly to combine. Cook a minute or two, until mixture is thick and bubbly. Turn heat down to medium, add in milk and stir to combine. Cook, stirring constantly, for about three minutes or until mixture is thick and bubbly. (Cooking hint: This is called "making a roux", pronounced "roo." A roux, or basic white sauce, is the basis of a lot of recipes!) Add in chicken stock and stir until stock and roux are well-integrated. Turn heat down to medium-low and add carrots, celery, chicken, salt, and pepper. Cover and let simmer for about 20 minutes, or until carrots are just barely tender. Turn heat back up to medium-high, add pasta, and cook until pasta is done. Serve with bread (we made a version of the 5-minute boule using about 1/2 wheat flour, and it was delicious!). A great rainy day meal!

Freezer instructions: Omit milk and freeze; add milk while cooking after freezing.
Posted by cindy baldwin at 7:49 AM 1 comment: 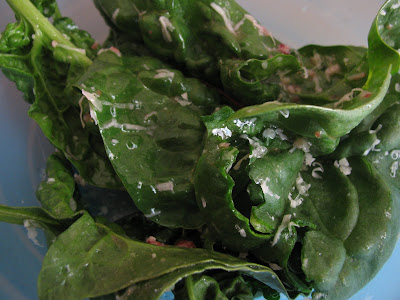 Rating: 5 stars
Prep time: Super easy
Someone gave us some beautiful garden spinach the other night, but since we haven't eaten much salad in the past year (it hasn't done well with my stomach issues) we didn't have any dressings on hand. Though Mahon and I are both diehard Ranch dressing fans, we wanted something quick and easy the other night to eat our spinach with. We both also happen to be diehard fruit vinaigrette fans, so I took a few nearly-dead strawberries in our fridge and whipped up this strawberry vinaigrette! It turned out PERFECT, and was so easy to make!
1/4 cup mashed strawberries
Just under 1/3 cup vinegar (we used red wine vinegar because that's what we had; I would imagine it would also be good with white wine vinegar, balsamic, or maybe even apple cider—anything but regular white, probably)
1/3 cup extra-virgin olive oil
Salt and pepper to taste
Honey to taste (I probably used a little under a tablespoon)
Mash strawberries with fork until they are well mashed and separated, but not pureed. Add vinegar, olive oil, salt and pepper and mix vigorously with a fork until liquids are combined. Add honey a little at a time until the dressing reaches the desired flavor—it shouldn't be sweet, but it shouldn't be take-the-roof-of-your-mouth-off sour, either. Add more salt and pepper if desired. Serve over any kind of salad—it was to die for on our fresh spinach!
Posted by cindy baldwin at 7:32 AM No comments: 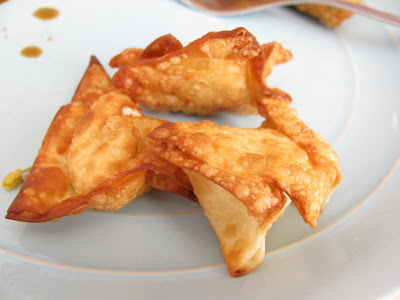 Rating: 4 stars
Prep Time: Easy
The other night while making eggrolls, we had several pasta sheets left over after the eggroll filling was all gone. Rather than stick them back in the fridge, I decided on the spur of the moment to imitate an appetizer we had had at (where else) Panda Express once—cream cheese won-tons. They were very easy, and the cream cheese went surprisingly well with the fried wrapper. We dipped them in soy sauce and the zing of the sauce was a great complement to the mildness of the cream cheese.
Eggroll wrappers cut in fourths (or won-ton wrappers)
Cream cheese
Canola/veggie oil for frying
Scoop a small dollop of cream cheese into the center of each won-ton square. Wet fingertip with water and dab on opposite corners of square. Bring opposite corners together and push to seal. Do the same thing with remaining corners. (Essentially, you're trying to draw all four corners into the center and seal the sides. You'll end up with a neat-looking little package.) Alternatively, if you're using won-ton wrappers, you can wrap them according to the directions on the package.
Fry in oil over medium heat, or when oil pops when water is dropped in, but isn't smoking much. Drain on paper towels. Serve with your choice of dipping sauce.
Posted by cindy baldwin at 8:14 AM 1 comment: 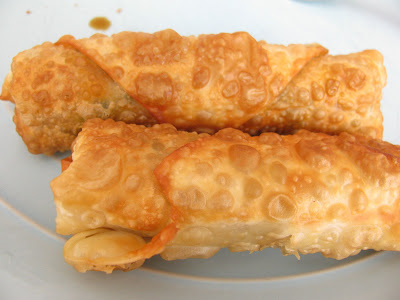 Rating: 5 lick-your-finger and steal-your-neighbor's plate stars
Prep time: Medium
This recipe is pretty versatile. If you're making it for a large family or group, add more ingredients; if you're making it for just two people, use the given proportions or add less. For Mahon and I, we usually end up with somewhere between 7-10 eggrolls, which is plenty for the two of us (they are big!). Also—as far as I know, Chinese eggrolls are usually made with cabbage, but I don't usually have cabbage on hand so lately I've just been putting spinach in these instead. It's delicious.
1 package egg roll wrappers (the big ones)
1-2 chicken breasts, boiled and shredded
2 large handfuls of spinach or about half a head of cabbage (chopped)
1/2 medium onion, coarsely chopped
2 large carrots, peeled and grated
1-2 cups mung bean sprouts (probably about a package)—really it just depends on how much you like bean sprouts!
1/4 teaspoon granulated garlic
Soy sauce
Paprika, if your husband is addicted to it like mine is
Canola or vegetable oil for frying
In large skillet or wok, heat a little olive oil. Add in onions, spinach/cabbage, carrots, and chicken. Season with garlic and paprika (if using). Stir-fry all ingredients on medium-high heat for a few minutes, stirring frequently, until onions are beginning to be soft and spinach (if using) is wilted. Splash in a few teaspoons of soy sauce. Once the onions and carrots are crisp-tender, add in the bean sprouts and sautee for another minute or so (not long or your bean sprouts will become limp and uninteresting!).
Remove from heat. Fill a smaller skillet with about 1-1 1/2" of canola oil and heat over medium-ish heat, until it pops if you drop water into it, but isn't smoking a ton. While oil is heating, fill eggroll wrappers according to package directions. We've found that we like long, thin eggrolls more than short, fat ones.
Fry eggrolls until evenly golden-brown on both sides. Serve warm, with sweet and sour or soy sauce to dip in. Try not to eat too many!!!
Posted by cindy baldwin at 2:08 PM No comments:

Labels: asian, chicken
Newer Posts Older Posts Home
Subscribe to: Posts (Atom)
This will be a place to store my favorite recipes—both those that are already in regular rotation at our house, and new recipes that we want to introduce into the rotation. Because I'm something of a cheapskate, nearly all of these recipes are ones that can be made with the kind of ingredients I usually have on hand—which aren't very fancy. (The exception is fresh parmesan cheese, which is a staple in our home!) I used to rate the recipes I posted here, but since they ALL ended up getting 5 stars, I discontinued that! Also, all of these recipes are fairly healthy, but those that make for particularly guilt-free eating are labeled "healthy."
Bon appetit!