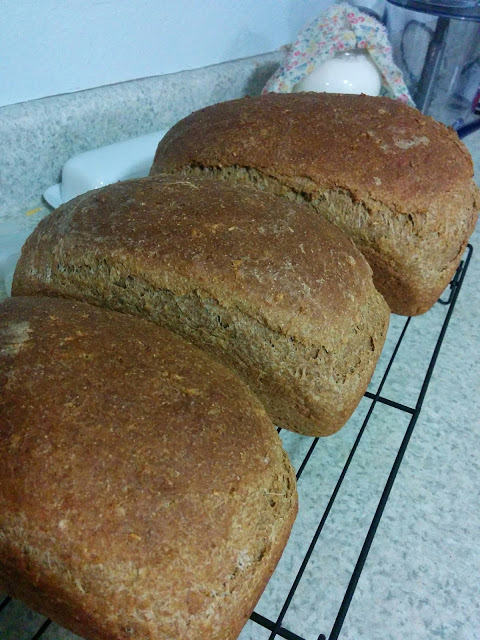 Prep Time: Easy to medium (easier than most bread recipes, a little more involved than many I've shared on this blog)
Source: Smitten Kitchen (slightly adapted)

There are few things I love more than a loaf of fresh bread, especially smothered in butter and homemade jam. While I have a few trusty recipes I use as my go-to—namely this one and this one—I also love to experiment with new ones. Lately I've been making a new soft-crusted sandwich bread that I absolutely love—it's tender but still hearty, and I also think much more filling because the dough is enriched with milk and eggs. (Those are totally optional, but the texture is definitely different without them.) According to the Smitten Kitchen recipe this can also be a refrigerated dough, but I've not had success with that as the dough itself isn't moist enough and develops a spongy texture when I try to refrigerate it. If you left out some of the flour and allowed it to be a stickier dough that didn't hold its shape at all, then it would be great in the fridge. So far, I've just been making batches of this and then freezing extra loaves for super low-maintenance bread for days at a time.

1 1/4 cups lukewarm water
1 1/4 cups lukewarm milk
(My trick: mixing hot water and cold milk, then I don't have to warm the milk)
1 T instant yeast
1 egg
1/4 cup oil
3 T molasses or honey (I measure it after the oil in the same cup, and then it doesn't stick!)
1 T coarse salt (if using fine salt use a bit less)
2 cups rolled oats
5ish cups whole wheat flour

Combine all ingredients except oats and flour, and mix together with a spoon or stand mixer (using the dough hook attachment). Add oats and then flour and mix for a minute or two. The dough will be fairly sticky and wet and probably won't pull away from the bowl much. Let rest for five minutes and then mix for another two minutes, adding more flour if needed; I like to get mine to the point where it's just beginning to pull away from the sides of the bowl but not forming a firm dough ball. Turn dough onto a floured counter, spray or rub your bowl with oil, and knead the dough a few times, then form into a ball and put back into the greased bowl. (I usually lightly grease the top of the dough as well.) Let rise for at least an hour, longer if you like (it's hard to over-raise a relatively high-moisture dough like this—it's very, very flexible). Preheat oven to 350 and shape loaves (you can do this either by forming them into cylinders or by rolling them out on the counter and then folding them over until they're roughly the size of your bread pan) and put into greased bread pans. Bake 8- or 9-inch loaves (normal sized loaves) for 40-50 minutes and small loaves for 25-30 minutes. Remove the loaves from the pans and cool on cooling racks. Or slice up and eat with butter, warm and delicious. I won't tell. ;)

Protip: Don't let your toddler spit in the bread dough. I'll let you guess whether or not that happened here!
Posted by cindy baldwin at 10:53 AM No comments:

Labels: bread, healthy
Newer Posts Older Posts Home
Subscribe to: Posts (Atom)
This will be a place to store my favorite recipes—both those that are already in regular rotation at our house, and new recipes that we want to introduce into the rotation. Because I'm something of a cheapskate, nearly all of these recipes are ones that can be made with the kind of ingredients I usually have on hand—which aren't very fancy. (The exception is fresh parmesan cheese, which is a staple in our home!) I used to rate the recipes I posted here, but since they ALL ended up getting 5 stars, I discontinued that! Also, all of these recipes are fairly healthy, but those that make for particularly guilt-free eating are labeled "healthy."
Bon appetit!