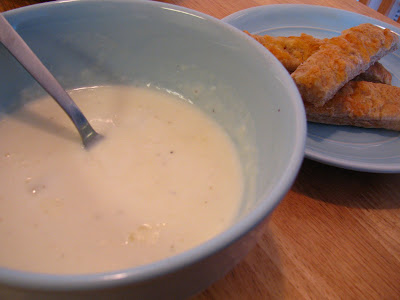 This is one of the very first things I learned to cook as a
little girl! It is a Ray family favorite and now a Baldwin

family favorite, as well. Although it is called "Baked
Potato Soup," I actually prefer the potatoes boiled.
It's much faster and they have a smoother texture.Rating: 1 million stars
Prep Time: Easy

Combine mashed potatoes & broth. Melt butter in pan, mix in flour and cook till bubbly. Slowly whisk in milk. Add spices, then add broth to mixture. Let cook at a very low simmer 20-40 minutes. Top with cheese, chives, or crumbled bacon. (Or, if you're me, none of these!)

The breadsticks featured in this picture are my favorite (and extremely versatile) recipe, which I'll post later.

Freezer instructions: Prepare roux as instructed but add half the broth instead and thicken. Add mashed potatoes to the other half of the broth and combine with roux. Fold in cooked potatoes and freeze (will be very thick). Thaw on stovetop and add milk; cook for about half an hour.
Posted by cindy baldwin at 9:00 PM