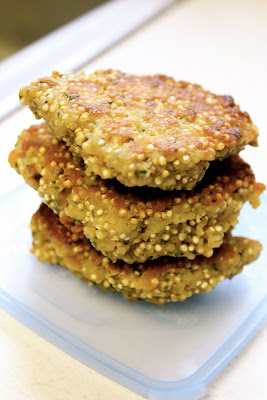 I'm always on the lookout for interesting new recipes, but especially right now—the last trimester of pregnancy has brought with it some pretty severe food intolerances to meat and dairy, so we've had to get pretty creative in the kitchen! This is a recipe I pinned to try a few weeks ago. I was initially skeptical—I like quinoa, but would it really be able to hold its own in such an unadorned main dish? Mahon wasn't so sure how he was going to feel about this dinner, either, so both of us approached it with a little hesitation. However, it didn't disappoint! We both loved it and mutually decided it should join our rotation. Mahon tried various toppings on his patties (I think maybe his favorite was BBQ sauce?) but decided he might like them best with gravy, so that the flavor of the patties could shine through a little more. I guess we'll have to try that next time! I halved the original recipe for the two of us, but ended up wishing I hadn't, as it only yielded 1 serving of leftovers and not 2.

In the future, I'd also like to play around with switching up the spices in these to create different flavors.

(Yield: About a dozen patties)

Combine eggs, salt, pepper, and quiona in a bowl. Stir in parsley, parmesan, garlic, and bread crumbs. (Go ahead and add a little more crumbs, or a teaspoon or two of water, if your mix seems too wet or dry.) Let stand five minutes.

Heat olive oil over medium heat in large skillet. Form mixture into patties with hands (about 1" thick) and cook until the bottoms are browned (between 5-10 minutes, depending on how hot your stove is). Flip and cook about 5 minutes on second side. Remove from pan and continue until all the mix is used up (you may need to add more EVOO to your pan in between batches—I did).

*Everything I read online says that quinoa quadruples when cooking, but I think that's crazy... mine never expands to that degree. I would say it tends to triple. After experimenting with several different ratios, I typically cook my quinoa with one cup grain to 1 1/4-1 1/2 cups broth.
Posted by cindy baldwin at 6:46 PM