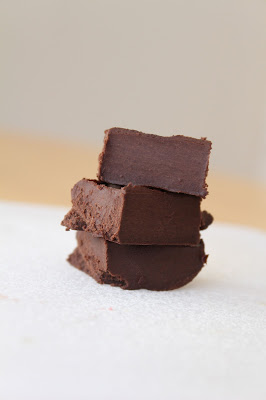 Prep time: Very easy
Source: From this pin, adapted from this recipe

A few years ago, I started wondering how one made chocolate. I figured that if I could figure out how to make my own chocolate without much sugar, I'd be saving money AND eating healthy, right? I read online that you can "make" chocolate by mixing cocoa powder with sweetener and an oil. (I put "make" in parantheses because really, making chocolate is an intense process that involves straight cocoa beans and all sorts of complicated steps like "conching.") I tried it and let's just say, it was a fairly nasty failure.

This year, however, I've seen lots of recipes for raw fudge popping up around the internet. They are all pretty similar—cocoa powder, plus coconut oil, plus a sweetener, plus another ingredient to add flavor and richness. I tried one last summer with raspberries in it that was delicious, but the combination of cocoa powder and raspberries gave me some of the worst canker sores I've ever had! Since then, I hadn't attempted another raw fudge/"homemade chocolate" recipe. A few weeks ago, however, I pinned this "Primal Fudge" recipe that used peanut butter, and yesterday, while in the mood for a sweet-but-not-terribly-unhealthy treat, I made it. Let's just say... it's really, really hard to stop myself from eating the whole pan! The fudge is rich, creamy, and incredibly decadent. If you like your chocolate a little sweeter, consider increasing the honey and decreasing the cocoa a bit. And now that you know the basic recipe for raw fudge, the sky is the limit! Try swapping the peanut butter out for other things, like fruit.

In a medium-sized bowl (I used a large soup bowl), melt the coconut oil. Using a whisk for smoothness, mix in the peanut butter, honey, and vanilla until all the lumps are gone. Add cocoa powder and whisk thoroughly until mixture is thick and smooth. Pour the mixture either into muffin cups (as the original recipe suggests), or into a small lined pan (I used a large loaf pan lined with plastic wrap). Chill in fridge for about an hour before cutting. Store in fridge, as the fudge is very soft and will get pretty melty at room temperature. Enjoy—and try not to eat the whole pan!
Posted by cindy baldwin at 2:25 PM