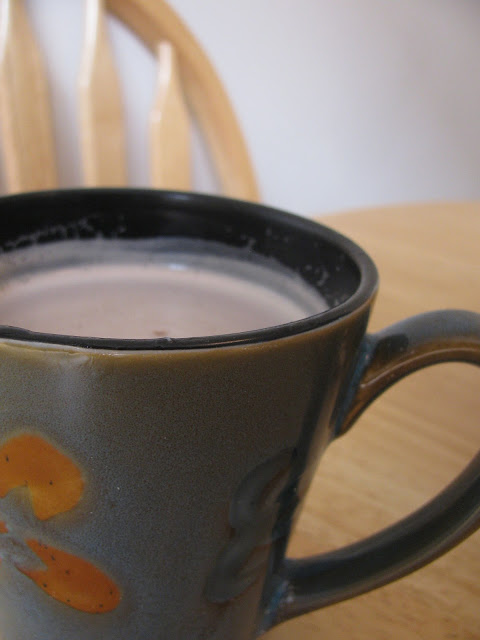 As with the past few years, I gave up sugar for Lent again this year. {Although going to the hospital sort of killed it for 2 weeks.} I tried something this time that I hadn't tried before—hot chocolate made with honey. I guess I'd always assumed it would have too much of a "honey" flavor... but boy, was I wrong! This stuff. Is. Amazing. In all honesty, I like it better than regular hot chocolate. One day while at the hospital I sat sipping a Starbucks hot chocolate from the lobby and all I could think was, "Hmm, this is good... but not as good as that honey hot chocolate I've been making!"

Because everyone has their own individual tastes, this is a very loose recipe. Feel free to change up the ratios of honey and cocoa to make a sweeter or more bitter hot cocoa. The exact recipe I'm providing tends to make a rich, very dark cocoa; you might want to add in a little more honey to taste if you like yours sweeter. You can also do water instead of milk, but I'll just warn you... it's nowhere near as good!

For one serving
(you can double this recipe as many times as you like to get a bigger batch):

Stovetop: Combine milk, honey, and cocoa in a small saucepan and warm over medium heat. (It's best to mix them with a whisk to make sure the cocoa doesn't clump.) If using raw honey, you'll want to add that to the milk first and let it melt before adding the cocoa. Once the desired temperature is reached, remove from heat and stir in vanilla. Don't boil the milk.

Microwave: In a microwave-safe mug (for one serving) or glass bowl or glass measure (for larger amounts), heat milk and honey together until desired temperature is reached (usually 1-2 minutes). I find it helpful to loosely cover my mug; it sort of "steams" the milk and prevents it from developing a skin. Remove from microwave (if you're using raw honey, make sure the honey is melted and integrated into the milk) and stir in cocoa and vanilla. Because the cocoa tends to clump, I find it is easiest to use a small whisk to combine everything.

You can also add anything else you would like—cinnamon is good (just make sure you add it at the same time as the cocoa so that it doesn't clump in the milk), as is a teaspoon of extra virgin coconut oil (and it's really healthy too!). The sky is the limit!

Oh, and if you're feeling particularly indulgent, add a little drizzle of heavy cream into your cup to cool it down! You will not regret it!
Posted by cindy baldwin at 7:59 PM